- Perihemorrhagic edema reduced with early hypothermia, but only for 3 days 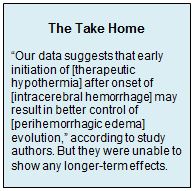 Early use of mild endovascular hypothermia may help control the evolution of perihemorrhagic edema from intracerebral hemorrhage, according to a study published in the September 2016 issue of Stroke. But its effects appear to be limited to the first 3 days and the approach may not improve clinical outcomes.

Bastian Volbers, MD, of the University of Erlangen-Nuremberg (Erlangen, Germany), and colleagues conducted a retrospective, case-control study of patients with intracerebral hemorrhage: 33 individuals treated with mild endovascular hypothermia to a target temperature of 35°C and 37 controls treated without hypothermia at the same center. Controls were matched with cases based on age as well as hemorrhage volume and localiation and presence of intraventricular hemorrhage.

“The approach of inducing hypothermia via catheter is mainly performed in specialized centers, eg, university hospitals or tertiary care centers,” he reported. But results to date have been pomising, Volbers said. “So far, it has been shown that hypothermia impacts perihemorrhagic edema. However, it is still a matter of research whether hypothermia also leads to a better outcome in patients with intracerebral hemorrhage.”

Finally, the hypothermia and controls were similar with respect to mRS score at 90 days.

Hypothermia has been shown to have a positive effect on “many different pathophysiological pathways,” explained Dr. Volbers. These include reducing “inflammatory or proapoptotic processes [and] blood-brain barrier damage,” he said. “It is also feasible and safe.”

The downside, he noted, is that the treatment requires specialized equipment not available everywhere. Also, “it remains difficult to perform this approach in conscious patients, as hypothermia may be experienced as unpleasant,” Dr. Volbers said. Additionally, adverse events such as pneuomonia and sepsis can occur, and it is unknown whether mild hypothermia influences whether patients can or will need surgery or other interventions.

According to Dr. Volbers, most alternatives to hypothermia for perihemorrhagic edema currently focus on management of elevated intracranial pressure. “Hardly any data exists regarding osmotic therapy using mannitol or hypertonic saline infusion,” he said, but the AHA/ASA guidelines for the management of cerebral and cerebellar infarction with swelling “recommend these procedures. Immunosuppressive therapy using glucocorticoids is currently not recommended.”

He also pointed out that patients with small hematoma volumes may not require any treatment for edema at all, since small hematomas typically only produce small edemas.

The upshot of these findings, Dr. Volbers concluded, is that “many questions remain at this time. Thus further research is warranted.”