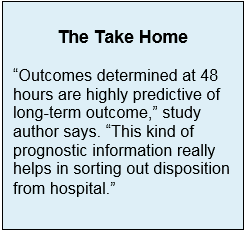 NIHSS scores were assessed at baseline and again at 1, 2, 5, 30, and 90 days. Subjects’ functional outcome was assessed using the modified Rankin Scale (mRS) at baseline, 30 days, and 90 days.

At 84.5%, the 2-day NIHSS trajectory was more accurate at predicting 90-day outcome than were NIHSS score at baseline, at 24 hours, the change between baseline and 24 hours, and infarct volume. This pattern held true with and without adjustment for other baseline characteristics including age, sex, ASPECTS, baseline occlusion, and intravenous alteplase. The improvement in predictive value that occurred with the addition of 5 and 30 day NIHSS assessments was negligible.

“We show that much of the improvement in acute stroke treatment occurs in the first few days,” Dr. Hill told Neurovascular Exchange in an email. “Outcomes determined at 48 hours are highly predictive of long-term outcome. This kind of prognostic information really helps in sorting out disposition from hospital.”

In a telephone interview with Neurovascular Exchange, accompanying editorialist Italo Linfante, MD, of the Herbert Wertheim College of Medicine and Baptist Hospital (Miami, FL), extrapolated on this notion.

Currently, Dr. Linfante explained, most clinical trials depend on 90-day mRS to determine outcomes. If a highly reliable marker of outcome could be determined much sooner than 90 days, this would drastically increase the efficiency of clinical trials and reduce their cost. Serial NIHSS scores fit the bill perfectly, because they are easy to measure and, according to this analysis, are highly predictive of 90-day mRS when recorded over the first 48 hours.

“Hopefully,” he said, “we can replicate these data and use this instrument to reduce the number of patients we need to enroll in clinical trials,” what with less potential for losing them to follow-up over the 90-day time horizon.

Serial NIHSS scores can also be used clinically, he added, as a prognostic indicator and decision-making tool. They much easier and less expensive to obtain than other markers such as infarct volume MRI.

Linfante I, Dabus G. Predicting outcomes in the era of endovascular therapy. Stroke. 2016;Epub ahead of print.

back to top
Category: Stroke